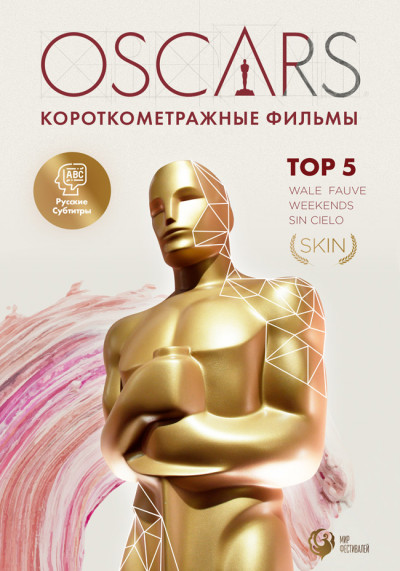 An almanac of the main short films of the Oscar Award-2019 is being released in cinema!
TOP-5 live-action and animated masterpieces:
The winner “Skin” dedicated to race hatred; Surreal animation “Weekends” about a small boy, who is going through his parents’ divorce;
a short film “Sin Cielo” about forbidden love between two teenagers;
a motion picture “Wale” – BAFTA nominated film about black guy, dreaming to get rid of his criminal past;
drama “Fauve”, a participator of a prestigious American festival Sundance, - a story about unusual friendship between two lads. Everything is in the special almanac TOP-5 OSCAR.

The award’s short-list is chosen by seven thousand the most successful cinematographers through the whole world. The programme’s films were also a part of a prestigious BAFTA-award, a festival of independent cinema Sundance and many others. Broadcast cities: Moscow, Saint Petersburg, Rostov-on-Don, Saratov, Nizhny Novgorod, Samara, Irkutsk, Tomsk, Tyumen, Novosibirsk, Kazan, Chelyabinsk, Perm, Ufa, Khabarovsk, Astrakhan, Yaroslavl, Krasnoyarsk, Krasnodar and others.

The films will be shown in the original language with Russian subtitles.
Timing: 98 minutes